A few weeks ago New York artist Meg Lipke visited MICA here in Baltimore for an artist talk and to meet with students. During her stay I met with her to discuss her studio practice, family history, and a deep generational and matriarchal relationship to the Arts. Lipke’s works exists between painting, sculpture, and textiles in an effortless way. Recently she has been experimenting with interactive works and collaborating with dancers and performers. You can see Lipke’s work up now at the University of Buffalo and always @meglipke

A: Can you talk about how your relationship to painting has changed over time?

M: For many years after graduate school I made oil paintings on stretched canvas and works on paper. I had a lot of shows and reviews but started eventually to come to a place where I felt ambivalent about my work.  I had reached a dead end in my practice and needed to find a new way to look at things and new ways to question. I think this is a common occurrence among artists and is a sign that you know how the ending of the “story” goes and you need a new story or a new ending. I decided to go back to drawing and see what arose from it.  For a year I made work on paper. That was helpful and really fun. I was experimenting with a lot with different approaches and materials. I wasn’t working with oils so everything was immediate and unedited. And then, in the middle of all of this searching, I received a package in the mail from my family in England and that changed everything.

The package contained a weaving that my grandmother had made forty years ago.  My grandmother was not a traditional weaver, nor did she have an art education – she was a self-taught artist named Patricia Sinlcair Hall, who worked primarily with the materials around her. The weaving had been made on a frame that was constructed out of plumbing pipes. The weaving itself was made from all different sorts of yarn leftover from the family’s former mill in Manchester.  The mill went bankrupt in the 1960’s and the surplus yarns – and the business- were brought home, turning my grandmother’s house into a warehouse of discarded yarns.

The weaving looked really contemporary and I was very moved by it.  My grandmother had used thick velour-like yarns that evoked intestines. The piece was sculptural and slightly grotesque and at the same time was made with beautiful colors and a complicated composition. Part of the content for me was that I knew my grandmother had a challenged life. In different circumstances she would have been an artist. But she was very poor and wasn’t able to go to art school. She married my grandfather, who had inherited the mill, and had four children. He was controlling and she was completely dependent and her house and her four children were her world.  Later it was discovered that he had the same mistress for most of his marriage to my grandmother. The weaving resonated with me because it made me question the hidden stories behind the objects that have been traditionally labelled as “women’s work”: samplers, or domestic goods and crafts. I hung up the weaving in my studio and it made me think about painting in a different way.

One of the first changes in the studio was to investigate ideas and fragments using craft materials like beeswax, dyes and yarns on cardboard.  This evolved to painting cloth on the studio floor. And soon I was cutting up the cloth and sewing and stuffing it. I felt a great relief in starting a body of work that didn’t incorporate the hard support and geometry of the wooden stretcher or support/panel. I felt a kinship to the feminists of the 1960’s and 1970’s and their work in soft sculpture. My mother, an artist named Catherine Hall, introduced me to this work just around the same time that she left her marriage to my father. She was also a great influence to me at this time because she has always embraced experimentation in her work and moves between sculpture, performance and painting. I think because of seeing her risk-taking, I felt that shifting painting away from the stretcher and into this different territory was something that I had already identified as a liberation.

From what I’ve read and what you said during your talk at MICA, some of your works seem to have had an alliance with the body and also circle around the historical precedence of painting and sculpture. This makes me wonder how you are thinking about your work now, in real time.

My paintings have become three-dimensional and because of the way they occupy both the plane of the wall (traditionally the place to view painting) and the floor (the traditional domain of sculpture) they raise a lot of questions.  The painting has a “body” and the painted and stained surface of canvas or muslin is more like a skin that stretches and has scars and wax and paint. At the same time, the works reference the frame, which is obviously from the tradition of Painting, and the idea of painting being able to transport us to a different place.

Because the paintings often sit on the floor they are regarded as having posture and bring up an immediate association with the demands on/of the body: gravity, rest, comfort. There is a lot of tension in the work and a desire to identify with the paintings simultaneously with our own physicality as viewers (a teenager once came in when I was installing a show in New York and asked if he could hug the work) and our artistic intellect (to try to make sense of the negative space or the field of vision inherent in the work). There is something funny and tragic at the same time in the work that I find really engaging. 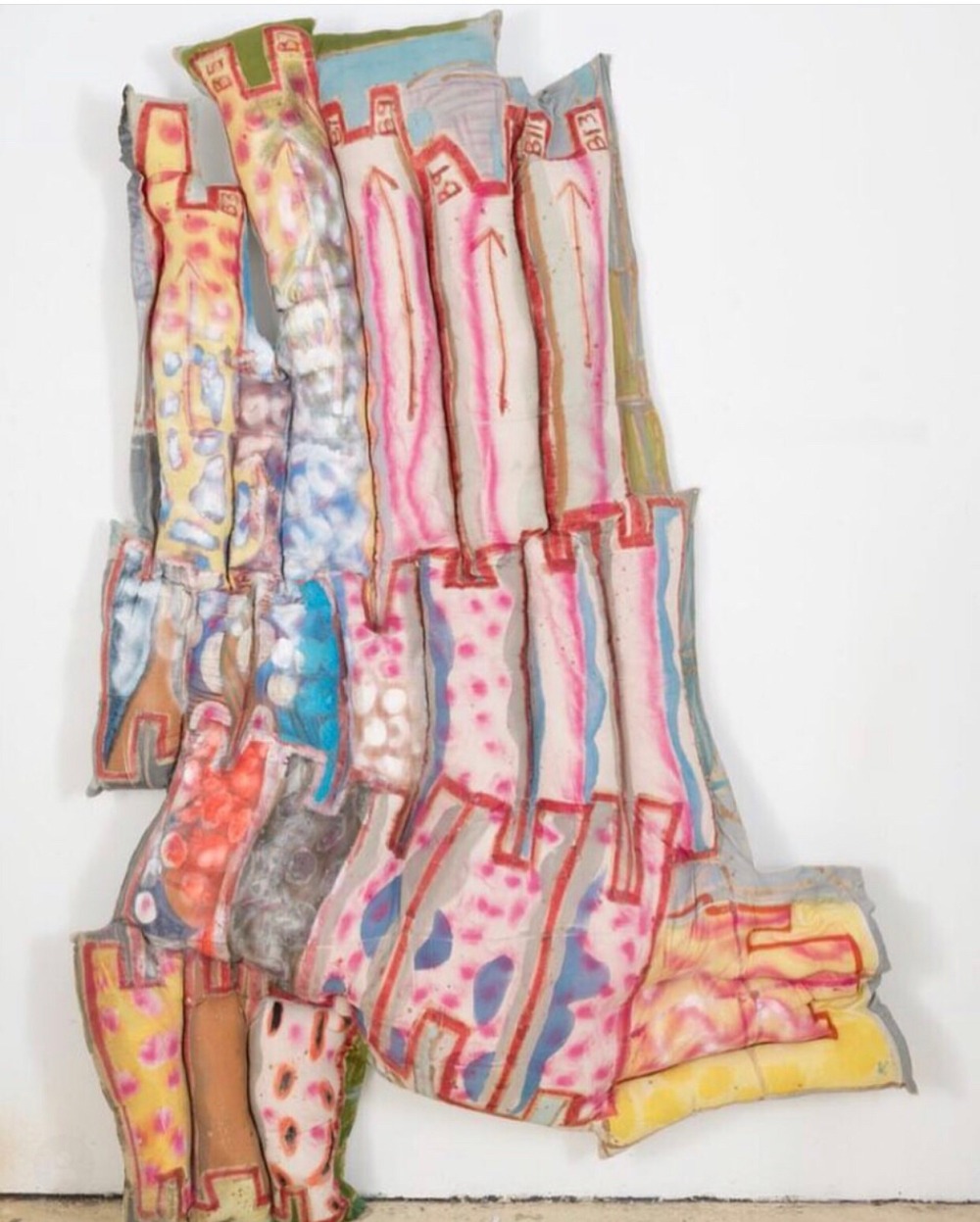 There’s a confidence and a swiftness to your objects that makes me feel like they’ve always existed. How much of your decision making is intuitive versus planned?

There are times when I have an idea about what the form is going to look like and and other times where I have no idea and the whole thing generates from the intuitive process of following ideas in the studio. In general, there is a vocabulary that I have honed in on that comes from years of my practice and which I rely on.  Many of the larger, more ambitious ideas began as small studies in the studio on cardboard.

Like, for example, a piece called Slump, which has been shown twice and in two distinct ways: once hanging on the wall and once sitting with its ‘back’ up against the wall and it’s bottom half  sitting on the floor. It’s a very large piece on canvas that has channels that are sewn into it and each channel is stuffed to become volumetric and painted. Like so many other pieces, which may seem effortless, Slump began as a crummy little studio model made out of cardboard and house paint. I saved it because I fell in love with it, it hung on the studio wall for a long time and I thought of it as a studio friend.  I later enlarged the original into a bigger cardboard piece, with some changes, and that evolved into a 5 x 6 ft drawing. With each iteration in different materials it became a new investigation and my relationship to the form became more intimate. Eventually, the final piece was made on canvas and stuffed to become a giant. I think I’m finished now with that piece and its relatives but who knows? This is all to say I’m not just pulling the moves out of my imagination. It’s a language that I’ve been developing for a while.

What are your working days like or how do you structure studio practice?

On a good day I might have six hours in the studio, but on average it’s more like four. Like most artists I have various other jobs:  I have three wonderful kids and a partner as well as off-and-on part-time teaching. I strive to give my children my full attention when I’m with them, and sometimes they come into the studio to help or to check things out.

I have a large barn studio in upstate New York where I have storage as well as room for the developing pieces. I keep a lot of things that don’t work, as well as scraps of cloth, ideas, and sketchbooks and journals. Any of these things might provide fodder for new work so I like to have things handy. 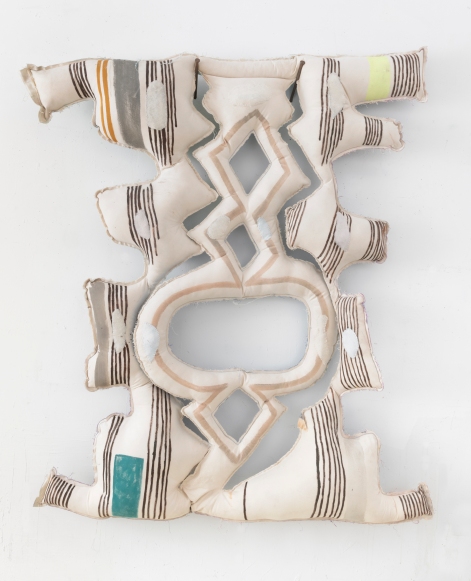 You just did an artist talk at MICA, as artists we are constantly reassessing our relationship to our own work. Do you have a way that you like to structure talks or present your work to others?

At MICA, I am talking about the point at which I diverged from making predominantly two dimensional work. And some of the more personal struggles of being an artist… it’s a more personal talk than usual. It’s so helpful for students to know that there’s still negotiation all the time. 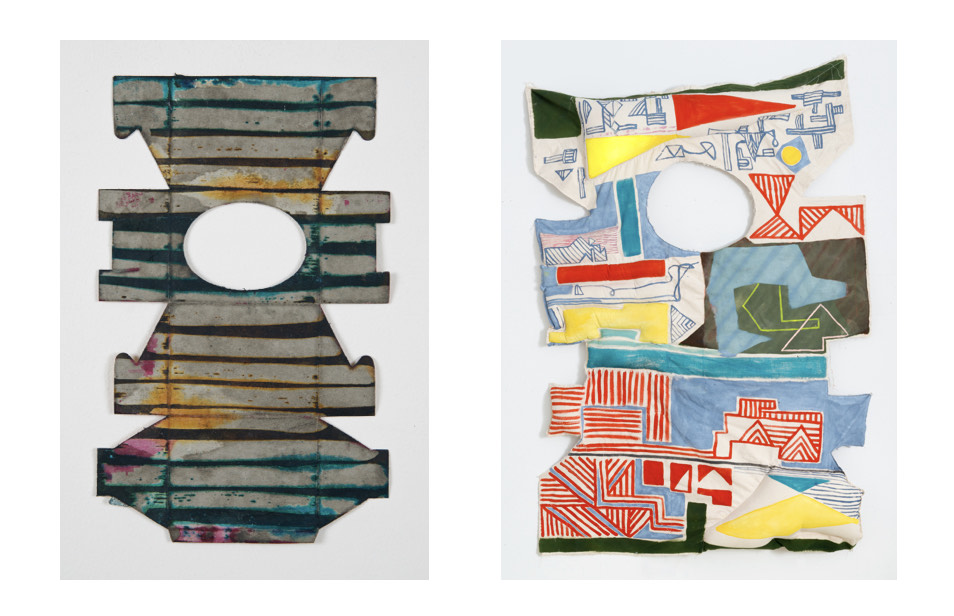 I want to stress that it’s important to allow yourself to show your vulnerability. In school you might not feel safe being totally vulnerable, and you just have to believe in yourself even if you feel terrible or like you have seven selves and you don’t know which one to trust. It’s possible that there will be periods during which no one will understand your work.  You just have to keep going. It gets better and better.

Do you have any projects or exhibitions coming up or anything that you’d like to promote?

Yes, I’m very excited about “Take Five” at the University of Buffalo. It’s being exhibited at both the Anderson Gallery off-campus and at the Arts Center, and it’s monumental work by me, Meghan Brady, Adriane Colburn, Melissa Dadourian and Tricia Keightley. It’s a very strong show curated by Bob Scalise of the Anderson Gallery.  The Anderson Gallery is a museum-like space with massively high ceilings, and it’s the ideal space to experience my work.

In addition, they have invited dancer and choreographer Julia Gleich and I to perform Survival Strategies, a dance and performance piece that we originally collaborated on for Counterpointe 7 in NYC last Spring.  I’m very excited to see what happens. We will be working with students and members of the Buffalo dance community.