Skip to content
Posted on August 8, 2018 by Inertia Studio Visits

Where did you grow up? 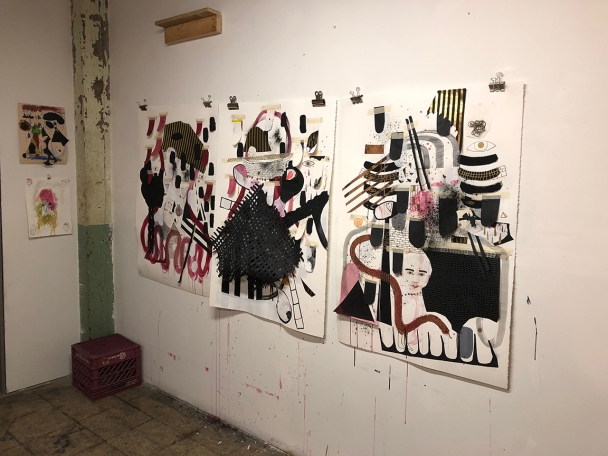 How long have you been in Baltimore and in your current studio?

When I graduated high school, I thought I’d never go back to Baltimore after college. I thought I’d stay in New York or move out west, but that didn’t happen. I moved back home to Baltimore in ‘98 and remained here ever since. I moved into my current studio at Area 405, three years ago.

I know that you work full time and have a family and wear many other hats, can you talk a little about what your days or weeks are like?

A special circumstance in my household is that my husband is also an active artist. We do a lot of negotiation of time and strategizing of what we have coming up as far as projects. Obviously family responsibilities come first, but now that my child is school-aged, that’s really opened up possibilities. During the school year our son is in school from 8:30 until 3:45. I go to work and I’m there around roughly the same time. I’m grateful that my mom is around to help, so there’s a lot of sharing of responsibilities. It’s all strategy, it can be crazy sometimes, but it works. During the weekends we enroll him in Saturday art classes at MICA, and they’re about three hours long, which is time I have in my studio. Sunday is usually family day. Of course, you also want to support interests that your child has–taking them to practice, or an event. It definitely is a serious matter of making sure everything is on a shared calendar!

I sometimes come into the studio on lunch during the work week. Most of my working life has been commuting outside of Baltimore, so when my job in Career Development at MICA opened up, one of the highlights for me was that it’s about five minutes away from my studio. When you have this short time to work,  an hour becomes very productive. Going on a residency, even for two weeks, I can easily produce a year’s worth of work. 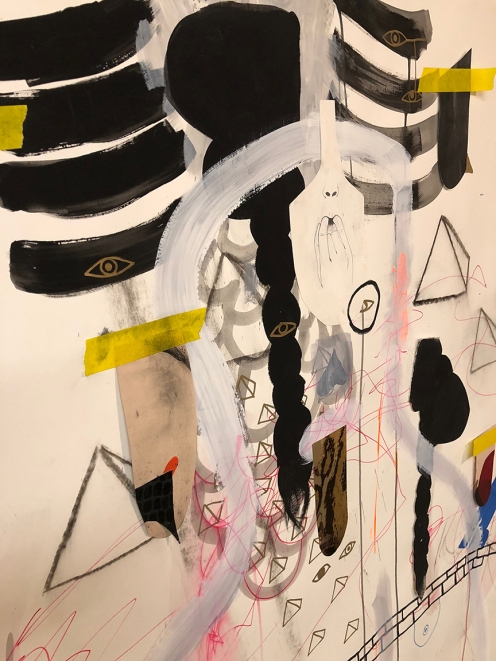 What kinds of materials or processes are you into right now?

I’m an omnivore when it comes to materials. I share my studio with Piero, my son, and whenever he comes in I first take him to the art supply store and he picks out a few things. So sometimes he’ll leave behind unused little pom-poms or stickers or crappy markers– and I’ll use it all.

I’ve been really into gold paint markers. I discovered I can make my own, too, but I haven’t explored it yet. I use flash paint, mostly black, it’s a type of acrylic that’s super matte. I love how when it dries it’s just like an abyss. I’m also using my old art as collage materials– old drawings are very vulnerable when they’re lying around the studio. I enjoy using masking tape a lot, and even drawing on it. I started doing weavings using paper. I love paper. I was thinking I should do a tapestry, using paper eventually. I like that I can tear it and manipulate it. I use any kind of paper, but I really love BFK Rives. 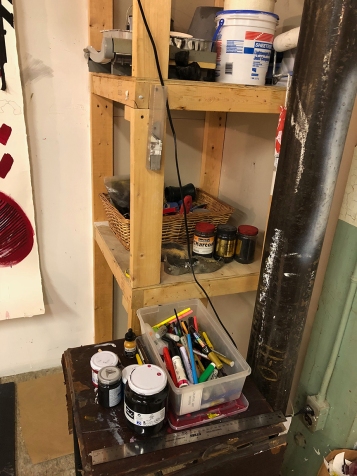 What are the underlying themes in your work, what are you trying to achieve?

I’m trying to create this new language using both symbols I invent, and one’s related to ancient Egyptian or Mayan cultures. As someone who is multi-ethnic, Egyptian and Honduran, this is my attempt of making something that’s mine–a new culture or history. That’s a really important overarching theme, but at the same time I’m asking why or how do we determine the value of these ancient symbols or structures? 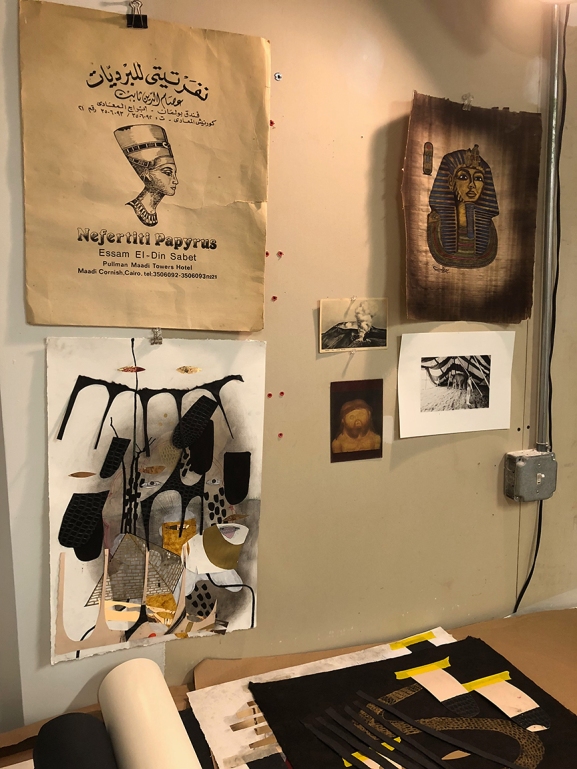 Equally important question is who is determining their value and worthy of preserving over milenia? I see there is a lot of power in that decision, since it is the story that gets passed down through generations. For example, the dramatic imagery of the Taliban destroying ancient Buddhist temples as a way to erase heritage. I was really struck by that. 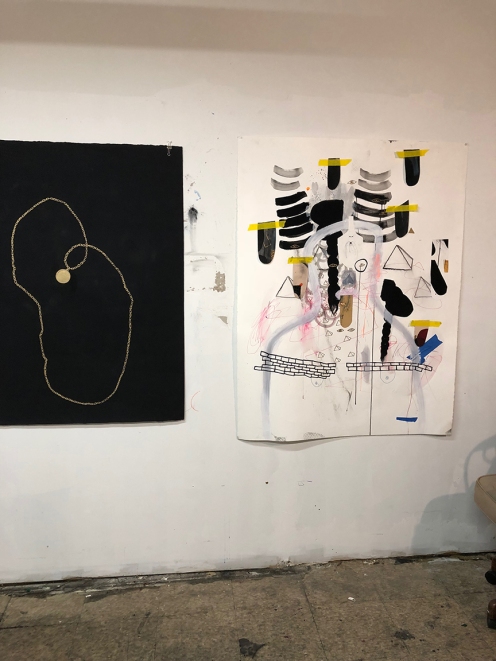 In terms of my drawings–all of the artwork that was done in the past, as artists we keep and document and we’re really precious about our work and give it a lot of intrinsic value. And then just socially we generally give a lot of value to the object an artist makes. So I thought that would be an interesting analogy, by using my older artwork to question the value or preciousness of an object. So I use my old work for collage material, cutting it up and then incorporating into my newer drawings, and giving new meaning to it. 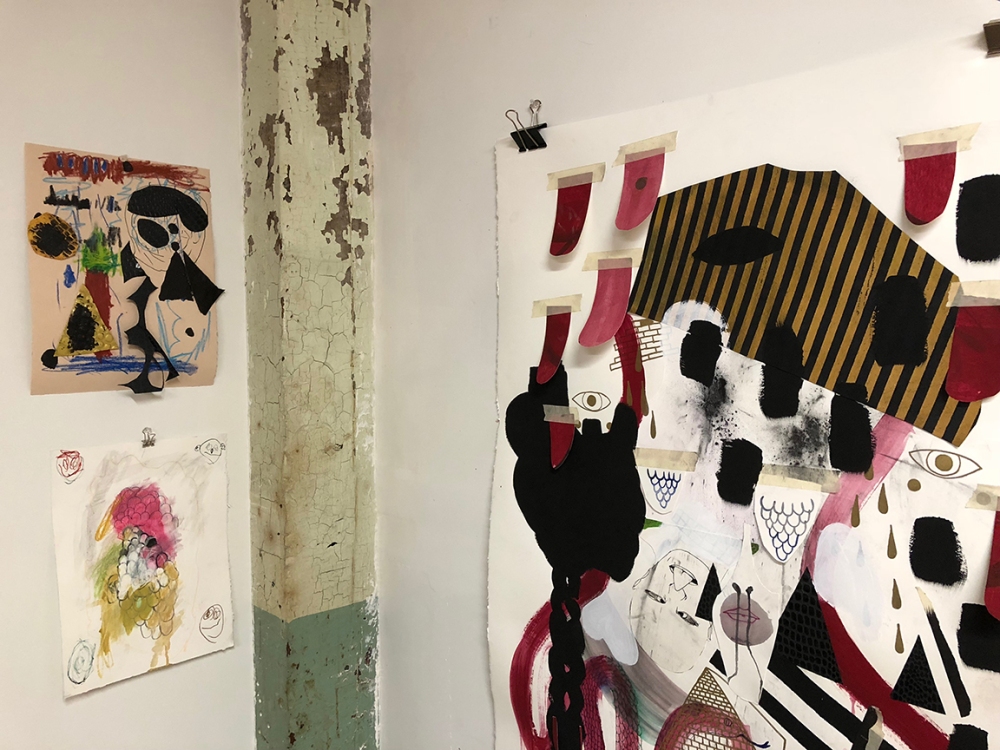 I bring up the snake a lot. It’s a symbol of destruction and chaos, but it’s also rebirth and bringer of knowledge. It has all kinds of associations and because of that, I’m bringing that symbol up a lot more than ever before. And what I realized recently is that I’m doing more abstracted faces and bodies; portraits, essentially. 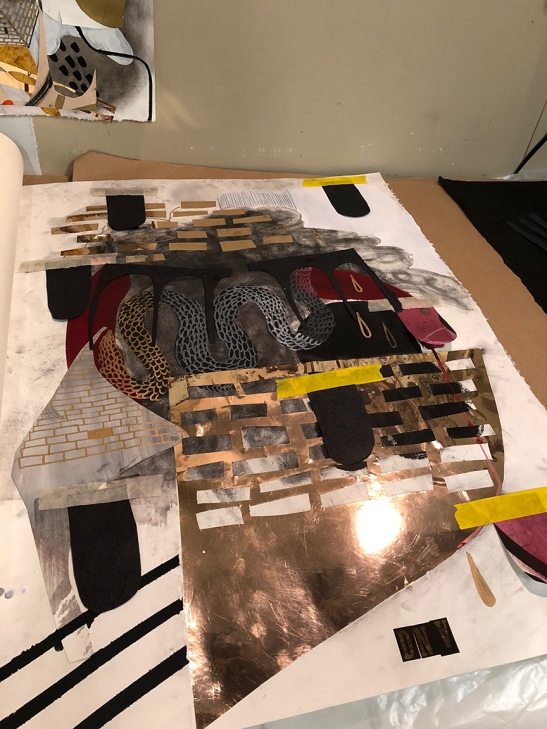 I always love thinking about art in the context of the time in which it was made, do you feel like your work is at all reflecting the world you’re living in right now?

Absolutely. Thinking about how we determine value on our world, I also think a lot about how we determine value for each other? Who gets the opportunities vs no opportunities? How does that power structure work? I want my work to feel aggressive or give a sense of destruction and chaos–that’s really in relation to how I feel in this time. It is chaotic and breaking apart.

As an artist, I have the privilege of expressing myself and channelling all this frustration I have with politics or how people value one life over another—all the anger I have about what’s going on in our world, I can take it out on my drawings. I can take it out in a very violent way–you know, tearing the paper, cutting it with scissors. Using profane language in the work, in English and Spanish. It’s messy, but things are messy right now. I think you could probably read further into it. Sometimes you don’t even realize that you’re being reactive to the world around you, then you pause to look at the work, and there it is.

As artists we have the highs and the (sometimes very) lows, how do you deal with issues in your practice? How do you keep going?

I’ve given myself a lot of room for that because I’m not precious about my work. If something doesn’t work, especially when I have a two hour window and I have to be productive because that’s all the time I have for today or this week, if it just looks like shit after two hours–it’s okay! The next time I come in, I will cut at it or use it later for collage. I never have that feeling that I wasted anything. I’ll put stuff up that I didn’t glue correctly and it’ll fall, so I’ll come in the next day and I’ll just decide to do something different with it. I’ve given myself permission to make shit sometimes and be okay with it. 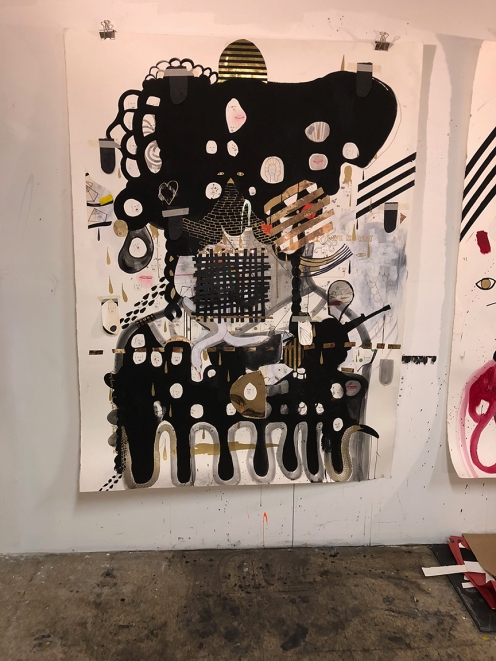 What do you have coming up? Anything you want to promote?

I have a two-person show with artist, Cindy Cheng titled “The Thing is Close” at School 33, August 31 – September 29, 2018. And then, for the last two years I’ve been working on a curatorial project for Towson University. The title for that show is  “Isla: Regarding Paradise”, and will be up from September 6 – October 20, 2018. It’s a monster of a show and with so many of my favorite artists, including: Alejandro Guzman, Allora & Calzadilla, Anabel Vázquez Rodriguez, Edra Soto, Eric Rivera, Edward Victor Sanchez, Gabriela Salazar, Héctor Arce-Espasas, Monica Rodriguez Medina, Pablo Guardiola, Rafael Vargas Bernard, Raquel Paiewonsky and Joiri Minaya. It’s going to be so good! 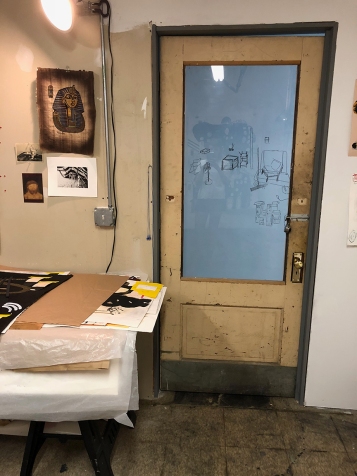 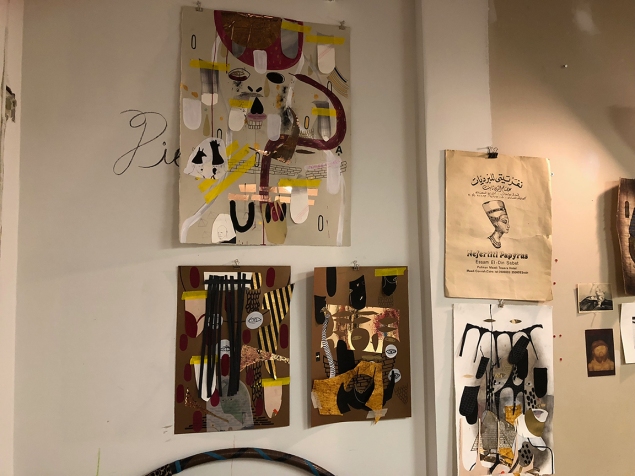