Can you talk briefly about the work you have here at Untitled, and how you feel it connects and/or differs from the work you might do in a gallery setting?

I have a big show coming up at the Atlanta Contemporary in April, and I’m thinking a lot about the OPEC countries. Their main trade is petroleum, but their agricultural sectors are all suffering because of the oil industry. Alongside their GDP’s, I’m looking at politicians/Western military complexes who have gone to war in aims to gain access to oil. So my current body of work (titled Medium of Exchange),  is a little bit more heavy handed. The exhibition will include photographs representing the OPEC ministers from each OPEC country: Characterizations of each figure play out amongst backdrops of oil fields and refineries that dot the landscape of the resource-rich region.

It’s always really important to me to make work that has political commentary/content, but am always thinking about way to get my audience to pay attention to an image before dissecting it: similar to a Trojan horse. What’s seductive, and how can seduction invite someone to pay attention to an issue? Using the language of product photography, the two photographs here at UNTITLED point specifically to the different sectors of economic growth and development in Iran. Through  illustrating  the Gross Domestic Products of the country, while putting them in conversation with Iran’s national sports: Soccer and wrestling, I aim to criticize the sense of national pride attached to these male-driven economies. I aim to highlight how nationalism and sport are often intertwined; as sports provide a venue for symbolic competition between nations, and these competitions often reflect national conflict. Agricultural exports such as saffron make up a significant amount of Iran’s agricultural trade, but this trade is maimed through the focus on the oil industry, which is the largest percentage of  of Iran’s GDP.

At art fairs there’s a lot of quick photos but maybe not a lot of immediate absorption from viewers. How do you feel about the way people interact with the work in this setting?

While speaking with my gallerists, and asking them how it has been going so far at the fair, they told me people have been gravitating towards the images, because of recognizable forms such as a soccer ball.  This becomes an entry point, that I hope challenges people to examine the materiality of the images and what else is in conversation with the soccer ball in the frame. The other day, a man told me he liked the image until he realized that the trophy was covered in oil, and then told me that ‘sports and politics’ should never mix. This for me is a constant reminder that visual work can serve as an opportunity to get people to reconsider their positions. I don’t aim to or expect to change anyone’s minds, but I get really excited when they feel challenged by the work.

In simple terms, what would you say is the driving force of your work overall?

My parents are both political refugees from Iran. I grew up with both of my parents expressing horrifying stories to me about their time inside the country in hiding, as well as their escapes. I was born in the US, but I didn’t speak English until I started elementary school. Growing up, my father would often  talk about human rights violations worldwide: he’s always been on top of international politics, so he would always make me privy to things growing up. As I got older and realized not everyone is really thinking about that stuff–it became the driving force for my practice. I like to think of ways to get people to contend with difficult issues without overwhelming them, and I think visual means are a great way to do so. 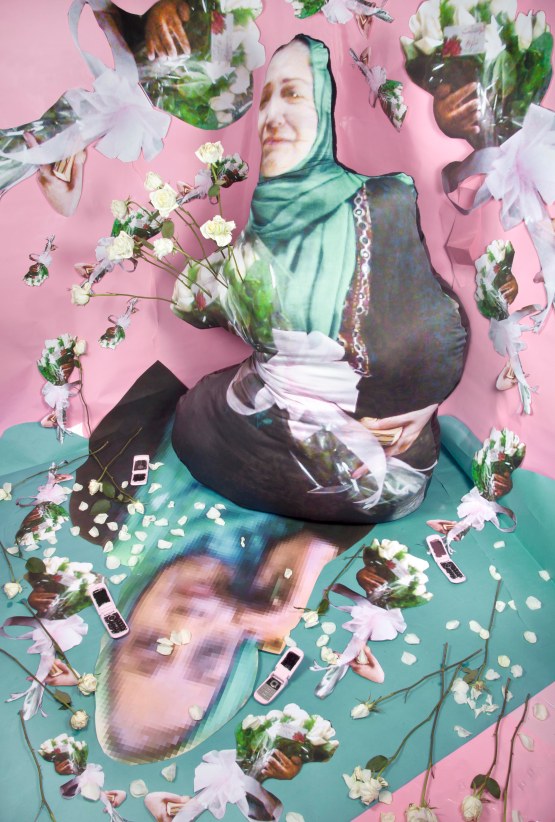 What do you hope the average viewer might take away from your work?

Questions. I want people to have questions. If they take away something from the work and explore the issue later on, I would be thrilled. I know not everyone will do that, but I want to poke at the complaisance of people and get them to feel uncomfortable.

What’s the most exciting part of your studio/professional practice right now, and do you have anything on the horizon?

I have a lot on the horizon that I’m very excited and nervous about. I randomly decided to start making screenplays–which I’ve never done video or film before. So the world premiere of a screenplay is happening at the Cincinnati Contemporary Art Center on March 29th. The screen plays are accompanying my first solo museum exhibition at the Atlanta Contemporary, which will open on April 12. In June, I have a solo show opening at the Cue Arts Foundation in NYC, and then October, I’ll be doing a solo show with my gallery Edel Assanti in London.

What other artists are you excited to see here?

I just saw some great photographs at NADA by Anetta Grzeszkowska

What are you most excited about this week?

I’m going to be on a residency in Jacksonville starting on Saturday! I’m so excited to be outdoors and explore- mostly excited to see gators and manatees. I’ll be making some new work, too, but I’m mostly stoked to get to relax a little!